Government competitions that are changing lives and educating the public

Government entities on all levels -city, state and federal have been promoting civic advancement through challenges for years.  Here are a few examples of some that Skild has helped to design and power.

Through its Prize2theFuture competition, the city of Birmingham, Alabama offered over $70,000 in prize money for ideas that could "transform Birmingham into a cooler, more vibrant city." Submissions poured in from all over the globe -37 countries - soliciting design ideas.  The winning design detailed plans for converting an abandoned downtown lot into "an eight-part celebration of community and social re-engagement."

The Colorado Innovation Network's (COIN) mission is to encourage, foster and promote innovation within the state of Colorado.  In one effort to achieve this goal, COIN, along with Colorado Governor John Hickenlooper, launched Glorious Failure: in Search of Success Innovation Challenge, Colorado's first-ever statewide business competition.  State entrepreneurs were tasked to share their personal stories by focusing on the lessons of failure, encouraging creativity, and responsible risk-taking.  Seven advanced industries were targeted: advanced manufacturing, aerospace, bioscience, electronics, energy and natural resources, information and technology, and infrastructure engineering.

Once the submission period was over, COIN was able to share the stories from all of the eligible entries through an online public voting gallery.

Rachio, a company that creates smart irrigation systems for homeowners, was the crowned the grand prize winner and received $50,000 in cash, as well as in-kind business services valued at $25,000.  The victory was certainly a boost for the company, as their products are now being sold by Home Depot and Amazon.

In addition to winning the respect of the internal competition judges, Rachio also received the most votes from the public.

The challenge was deemed a success, as Governor Hickenlooper stated, "Colorado is generating buzz as a national leader in innovation.  The finalists are shining examples of the talent, creativity and advanced thinking taking place right in our backyard. It’s an exciting time for Colorado, and we are honored to be able to provide a platform for new and groundbreaking companies to gain recognition." 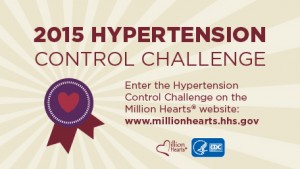 Could a competition save lives?  This one just might.

Million Hearts® is a national initiative that was launched by the Department of Health and Human Services in September 2011 to prevent 1 million heart attacks and strokes by 2017.

One of the initiatives sponsored by Million Hearts® is the Hypertension Control Challenge.  High blood pressure is out of control for too many Americans. The latest data show that nearly 1 in 3 American adults—approximately 70 million—has high blood pressure, and only about half have it safely controlled.  Many practices and systems have succeeded in working with their patients to get blood pressure under control.

This year's contest is still open, so we encourage you to submit your nomination or encourage high-performing small and large practices to enter.

These are just three examples of how government agencies are turing to challenges, contest and competitions to bring about change and improve the lives of citizens.  Stay tuned, as we'll be featuring even more examples in upcoming posts.

Innovation Challenges and the Unforeseen Blessings of a Crisis

From the U.S. Department of Energy’s Idaho National Laboratory, A Call to Accelerate Geothermal Innovation