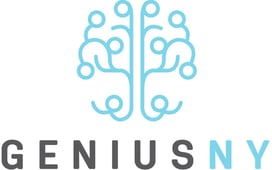 For the fifth consecutive year, Skild has partnered with GENIUS NY, the world’s largest accelerator program for unmanned systems, IoT, and big data. The program is funded by Empire State Development and administered at CenterState CEO’s Tech Garden incubator in Syracuse, New York. Five finalists are selected for the year-long program and receive $3M in funding.

From those five finalists, one winner is announced — and that winner has just been revealed!

On October 26, Governor Kathy Hochul announced that Airtonomy, of Grand Forks, North Dakota, is the $1 million grand prize winner of Round 5 of the GENIUS NY accelerator competition.

Airtonomy, which was started in 2018 and has 25 employees, enables anyone to collect data uniformly using autonomous vehicles or drones. It makes complex flight as easy as pushing a button so that a wind technician, security guard, or power lineman can operate a drone safely and consistently, and collect data uniformly. This means data collected can be processed automatically using machine learning and turned into actionable intelligence for an organization.

Skild is proud to have powered GENIUS NY for the past five years and looks forward to further breakthroughs ahead. To read more about the winner, click here.