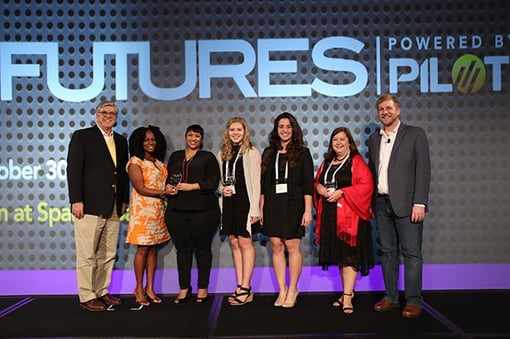 The PILOT Innovation Challenge sought ideas that would help local radio and TV broadcasters engage their communities with next generation content through new uses of current technology, or utilize wholly new or emerging technologies.

In Your Shoes, a Virtual Reality series that uses VR to capture unique stories from intimate perspectives, won first place and $20,000.  The unique ability of virtual reality to bring down the walls between passive viewer and first person participant is the basis of In Your Shoes. 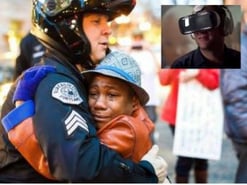 “We wanted to put together a series that takes the best of both broadcast worlds,” Robinne Burrell said, taking from the traditional stories that you follow on television, but combining it with the opportunity to “step into the stories of the other individuals and then really experience their point of view.”

Second place and $15,000 was awarded to History Go, an Augmented Reality app that displays historic images and facts.  Using augmented reality, the app allows users to view their surroundings in the way that they once were. “Imagine that you’re walking down the streets of New York and you see the Empire State Building” says Jordan Sales, History Go’s project leader. “You could pull out your phone and open History Go, and instead of seeing the building in 2016, you could see it as it was in 1930 when it was being built, with facts and history and first hand accounts.”

Third place and $10,000 was awarded to Chandra Clark, developer of The News Call, a DVR like service for radio news.  The News Call works similarly to the way a DVR works for television. “You could pre-program the news you want to hear, when you want to hear it.” Chandra said that you could then use the bluetooth available in your car to “hit one button and start listening to your preferred choice of news, sports and weather from any news outlet in the world.”

The PILOT Innovation Challenge is powered by Skild.